No, That is Not a Picture of My Baby

funny word of the day: womb

1 : uterus
2 a : a cavity or space that resembles a womb in containing and enveloping b : a place where something is generated

As you may have guessed, at 38 weeks pregnant I have baby on the brain! When the little one arrives, I may have to take a hiatus from posting funny words of the day -- or it may become more like funny word of the week (or month depending how needy this kid is)!

funny word of the day: aphrodisiac

1 : an agent (as a food or drug) that arouses or is held to arouse sexual desire
2 : something that excites

2corny Function: adjective Inflected Form(s): corn·i·er; corn·i·est Date: 1689 : relating to or having corns on the feet
Ew. The 2nd definition is really gross.

funny word of the day: fern

A fern is any one of a group of about 12,000 species of plants [3]. Unlike mosses they have xylem and phloem (making them vascular plants). They have stems, leaves, and roots like other vascular plants. Ferns do not have either seeds or flowers (they reproduce via spores).

By far the largest group of ferns are the leptosporangiate ferns, but ferns as defined here (also called monilophytes) include horsetails, whisk ferns, marattioid ferns, and ophioglossoid ferns. The term pteridophyte also refers to ferns (and possibly other seedless vascular plants; see classification section below).

Ferns first appear in the fossil record in the Carboniferous but many of the current families and species did not appear until roughly the late Cretaceous (after flowering plants came to dominate many environments).

Ferns are not of major economic importance, but some are grown or gathered for food, as ornamental plants, or for remediating contaminated soils. Some are significant weeds. They also feature in mythology, medicine, and art.

But I think it's funny because it reminds me of a leathery-tan, chain-smoking yenta who wears hot pink lipstick and introduces herself in a gravelly voice, "Fern here. Let's tawk."

They're Not Your Ilk 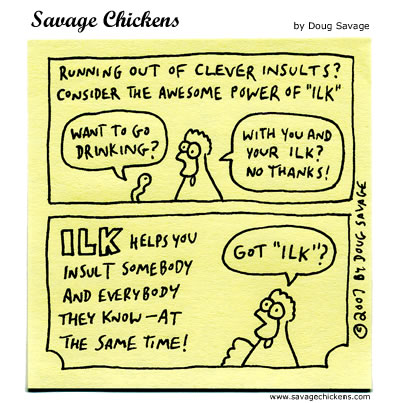 funny word of the day: ilk

1ilk
Pronunciation: \ˈilk\
Function: pronoun
Etymology: Middle English, from Old English ilca, from *i- that, the same (akin to Gothic is he, Latin, he, that) + *lik- form (whence Old English līc body) — more at iterate, like
Date: before 12th century

chiefly Scottish : same —used with that especially in the names of landed families

funny word of the day: pupa

From Wikipedia, the free encyclopedia

Pupa of the Cockchafer (Melolontha melolontha)

A pupa (Latin pupa for doll, pl: pupae or pupas) is the life stage of some insects undergoing transformation. The pupal stage is found only in holometabolous insects, those that undergo a complete metamorphosis, going through four life stages; embryo, larva, pupa and imago.

Pupation may be brief, for example 2 weeks as in monarch butterflies, or the pupa may enter dormancy or diapause until the appropriate season for the adult insect (in temperate climate pupae usually stay dormant during winter, in the tropics pupae usually do so during the dry season). Pupation may last weeks, months or even years. Anise Swallowtails sometimes emerge after years as a chrysalis.
Posted by Jessica K at 2:26 PM No comments: