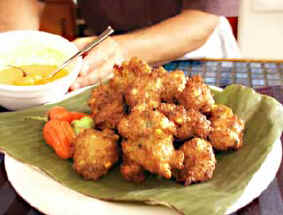 funny word of the day: conch

From Wikipedia:
A conch (pronounced /ˈkɒŋk/ "konk" or /ˈkɒntʃ/)[1] is one of a number of different species of medium-sized to large saltwater snails or their shells. The true conchs are marine gastropod molluscs in the family Strombidae, and the genus Strombus and other closely related genera.

The name "conch" comes, via French, from the Greek word meaning any kind of shellfish or their shells.

The first use in English cited by the OED is from 1398, and declares firmly that "Al that fysshe wyth the shelles ben callyd conch" in other words, "all water animals with shells are called conch."

Later the word conch narrowed in usage, and is now primarily used for the shells (or whole animals, or meat) of several different kinds of large sea snails that have shells which are pointed at both ends. A conch shell has a high spire and a noticeable siphonal canal.

Species often called a "conch" that are not in the family Strombidae include the crown conch Melongena species; the horse conch Pleuroploca gigantea; and the sacred chank or more correctly Shankha shell, Turbinella pyrum.

Another use of the word, the conch in architecture is used in the old sense, and refers to a mollusk shell from a different class, the Bivalvia or bivalves, and which has a totally different shape, that of a scallop.

The true conch species within the genus Strombus vary in size from fairly small to very large. Several of the larger species are economically important as food sources; these include the endangered queen conch or pink conch Strombus gigas, which very rarely may produce a pink, gem quality pearl.

About 74 species of the Strombidae family are living, and a much larger number of species exist only in the fossil record.[2] Of the living species, most are in the Indian and Pacific Oceans. Six species live in the greater Caribbean region, including the Queen Conch, and the West Indian Fighting Conch, Strombus pugilis.

Many species of true conchs live on sandy bottoms among beds of sea grass in tropical waters.

Okay...now for the good stuff. Conch fritters. Indigenous to the Caribbean and West Indies, these deep-fried sea critters are delicious. Here's a recipe if you want to try to make them yourself: