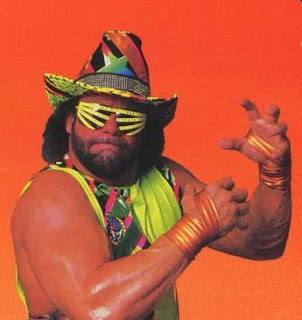 funny word of the day: macho
Definition from Merriam-Webster:
1ma·cho
Pronunciation:
\ˈmä-(ˌ)chō\
Function:
adjective
Etymology:
Spanish, literally, male, from Latin masculus — more at masculine
Date:
1928
: characterized by machismo : aggressively virile
When I was a kid, I used to love watching WWF (now called WWE) and Macho Man Randy Savage (pictured above) was one of my favorite wrestlers, along with Jesse "The Body" Ventura" and The Angry Samoans. Now looking at his picture, I can't believe I ever followed someone so ridiculous-looking. What's up with those glasses, dude?
Posted by Jessica K at 9:15 AM